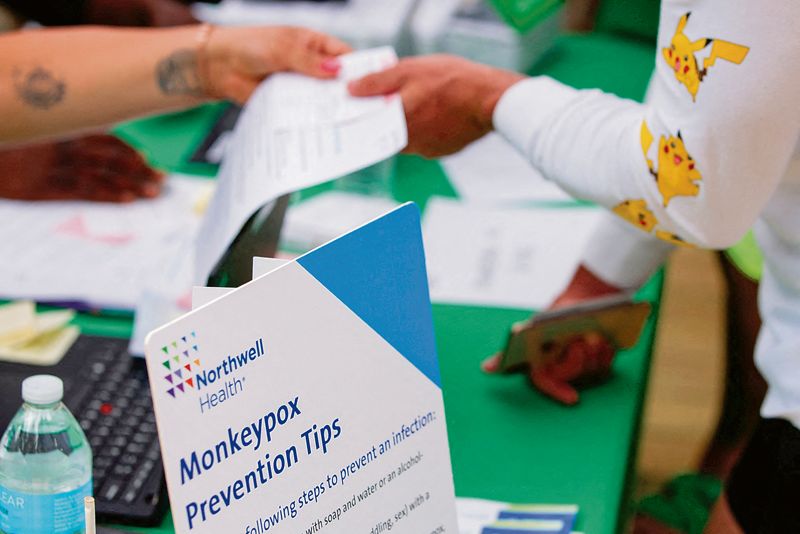 THE world is yet to fully overcome the coronavirus pandemic with new cases still being reported in many countries including India. Amid efforts to end the pandemic, a new health threat has emerged – an outbreak of monkeypox in several countries. Some 17,000 cases have been reported in 75 countries. India has so far recorded four confirmed cases.

Given the large animal and human population who live close to forests and wildlife habitats, India is a hotspot for zoonotic diseases.

Although not a new virus like SARS-COV-2, which led to the Covid pandemic, monkeypox has spread rapidly even to countries that have not seen it before . The outbreak has been declared an international health emergency as WHO experts see a risk of international spread. These are the early days of the epidemic and scientific data on new modes of transmission are still emerging. Surveillance and public health measures have been suggested based on available data and prior knowledge. However, the risk of the virus causing travel disruption etc remains low, for now, and a vaccine against it exists. So there is no need to panic.

Yet the frequency with which new health threats emerge shows that emerging and re-emerging infections, especially zoonotic diseases, will dominate health discourse. Monkeypox is a re-emerging disease. It has been endemic in a dozen countries in Central and West Africa for almost half a century. This is causing some concern now as the current outbreak has spread to dozens of non-endemic countries.

The monkeypox virus belongs to the same genus as smallpox. Its recent history is closely linked to that of smallpox. The monkeypox virus was first reported in 1959 in long-tailed macaque monkeys used in laboratory experiments to test new drugs. It was reported by a laboratory in Copenhagen which had imported monkeys from Singapore. When the WHO launched the smallpox eradication programme, its physician in charge DA Henderson undertook a study to determine whether non-human primates such as monkeys were a reservoir of the smallpox virus. This was essential because if there was a large reservoir of smallpox in the wild, it could pose a threat to the human smallpox eradication program.

In the 1960s and 1970s, India exported monkeys for animal studies in Western laboratories. Henderson investigated 26 major laboratories that had colonies of experimental monkeys. Several of them reported the presence of monkeypox but found no transmission to humans. Lederle Laboratories have handled some 8,000 monkeys and reported the presence of monkeypox virus in some rhesus monkeys arriving from India. Another American pharmaceutical company, Wyeth Laboratories, also discovered the monkeypox virus in monkeys from India.

Henderson’s study published in 1968 is a significant indicator of the presence of monkeypox in Indian monkeys, although the study concluded that “man may be relatively insensitive” to the virus. He was wrong when the first human case of monkeypox was reported in Congo in 1970 by WHO smallpox eradication officials. Several species of monkeys inhabited the area from which the case was reported, and monkey meat was considered a delicacy among locals. The first outbreak outside endemic countries was reported in the United States in 2003.

Animals are a reservoir of a range of pathogens and viruses. Sometimes these viruses can jump from species to species and spread to humans. In recent years, we have seen several outbreaks of zoonotic diseases, such as Avian Influenza, SARS, Pandemic Influenza H1N1, MERS-CoV, Ebola, and SARS-Cov-2. Even the commonly reported rabies, which is transmitted by dogs, is a zoonotic disease. The viruses responsible for these diseases are spread through an interaction between humans, animals and the environment, and they affect human and animal health, and can potentially impact food supplies. Many factors are responsible for increased contact between humans and animals – from deforestation to increased meat consumption and even animal husbandry. In recent years, Indians have taken to keeping exotic animals as pets. Livestock and other animals like monkeys and dogs live nearby in many areas. The threat of new infectious agents is also increasing due to increased travel, changing dietary habits and the international trade in animal meat.

In order to prevent and contain zoonotic diseases, it is necessary to adopt an integrated approach to human and animal infections in what has been called “one health”. This means that different agencies concerned with animal and human health, food supply, wildlife, etc., should work together. There must be constant surveillance for infections shared between humans, livestock and wildlife. Over the past few years, a number of intersectoral committees, plans and frameworks have been prepared to implement “One Health”, but progress is slow. The National Center for Disease Control has directed all states and UTs to form zoonotic committees at the state and district levels, but not all states have this infrastructure in place. Wherever these panels exist, there is ambiguity about the alignment of the work of the livestock, forestry and wildlife departments when it comes to performing tasks such as monitoring and control. There is a lack of technical capacity at different levels. In the Northeastern border states, there is a need to monitor cross-border pathogens. In addition, the integrated disease surveillance program to monitor new human infections needs to be further strengthened.

Considering the large livestock population and human populations that live close to forests and wildlife habitats, India is a hotspot for zoonotic diseases. The Covid pandemic, and now the monkeypox epidemic, serve as a reminder of the imminent dangers to human health and the need for urgent action. India must prioritize investments to strengthen human and animal health infrastructure at all levels, develop the necessary technical manpower and operationalize policies to make “One Health” a reality on the ground.