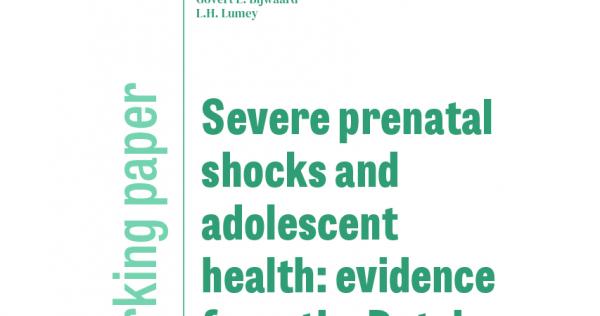 Severe prenatal shocks and adolescent health: Evidence from the Hunger Winter in the Netherlands

This article investigates the impacts, mechanisms, and selection eﬀects of prenatal exposure to multiple shocks, exploiting the unique natural experiment of the Dutch Hunger Winter. At the end of World War II, a famine occurred abruptly in the western Netherlands (November 1944 – May 1945), pushing the previously and subsequently well-fed Dutch population to the brink of starvation. We link high-quality data on military recruits to objective health measures for cohorts born in the years surrounding World War II with newly digitized historical records of calories and nutrient composition of wartime rations, temperature daily life and deaths due to war. Using differences-in-differences and triple-differences research models, we show that cohorts exposed to the Dutch Hunger Winter from early gestation have a higher body mass index and an increased likelihood of being overweight at 18 years, and that this effect is partly explained. for war exposure and a reduction in energy-adjusted protein intake. Additionally, we account for selective mortality using a copula-based approach and newly digitized data on survival rates, and find evidence for selection and scarring effects. These results underline the complexity of the mechanisms involved in the study of the consequences of early illnesses.