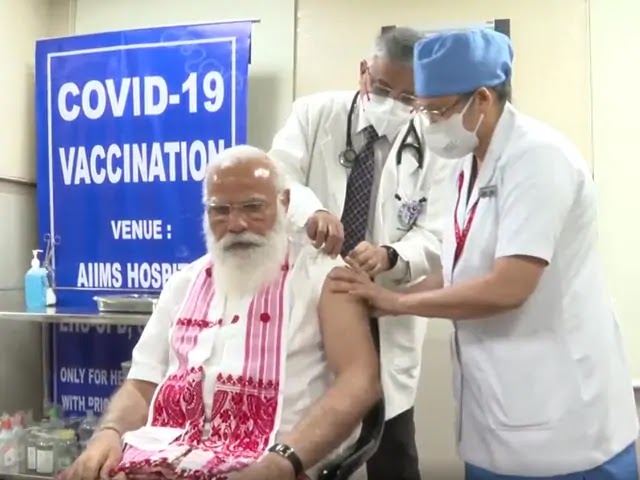 One Earth One Health from Modi only for international consumption?

By Bobby Ramakant, Sandeep Pandey *
When India was under the most severe impact of the Covid pandemic, and the peak of around 450,000 new cases was reported in 24 hours around mid-April 2021, an interesting timeline of events unfolded regarding the Covid vaccination program (with Kumbh in Uttarakhand and elections in West Bengal and Uttar Pradesh).
The Indian government observed the “teekautsav” from April 11 to 14, 2021, then soon after congratulated itself by announcing the vaccination for all people over 18 years of age nationwide, and on April 23, 2021, the ministry of Health and Family Welfare, Government of India, declared its â€œLiberalized Pricing and Accelerated National Vaccination Strategy against Covid-19â€ in which it abdicated its responsibility to vaccinate the citizens of the group of age 18-44 years.
The “liberalized” in the phrase was not about people, it was meant for private companies and it is no wonder the government is working in tandem with them. Two private vaccine makers have been allowed to report their exorbitant costs to state governments and private hospitals. No one would believe that companies acted on their own.
After protests from various state governments, civil society, lagged behind in the vaccination campaign and pressure from the Supreme Court, which described its liberalized vaccination policy as arbitrary and irrational, the government proposed revised guidelines for the implementation of the national Covid vaccination program in June. 8 under which it has now taken responsibility for procuring the 75% of vaccines by the Union government, including on behalf of state governments.
However, the Prime Minister has always authorized the purchase of 25% of vaccines by private companies. A cap of Rs. 150 has been put on the vaccination costs for private hospitals that will procure Covishield, Covaxin and Sputnik vaccines, respectively at Rs 600, Rs 1,200 and Rs 948. With the GST, the final cost would be Rs 780, Rs 1,410 and Rs 1,145, respectively.
It is important to note that the ceiling of Rs 150 has been announced on vaccination costs for private hospitals, but vaccine manufacturers have had carte blanche to announce their prices. We must not forget that the government had already bought Covishield and Covaxin at Rs 150 per dose. So why did the government accept such inflated prices advertised by manufacturers?
The bureau’s memorandum says that if Covid vaccination centers overcharge, strict action will be taken against them, but vaccine prices can be appropriately changed if the manufacturer declares changed prices. Why is the government, while being strict on private hospitals, lenient towards private companies?
Why is the Prime Minister, whose priority should have been to vaccinate the country’s population to such an extent that collective immunity would have been triggered, still allowing private companies to make a profit? Narendra Modi calls for ‘One Land, One Health‘ at G7 Outreach Summit to seek support for Covid vaccine patent waiver, but is reluctant to implement ‘One Nation, One Vaccine’ policy in his own country.
It turns out that the reach of private hospitals is very limited. Of the 7.4 crore of vaccine made available in May, 1.85 crore was allocated to private hospitals. While we have witnessed the closure of government vaccination centers due to a vaccine shortage, private hospitals were sitting on vaccines that could deliver only 22 lakh of doses. Of the 1.2 crores of vaccines actually purchased by private hospitals, half of them were stuck by nine large hospitals in metropolitan centers.
The government’s blatant criminal complicity in helping private actors make profits at the cost of people’s lives is exposed. It is also evident that the people with the money will have an oversupply and the poor will suffer from the shortage. This goes against Modi’s appeal of One Earth One Health, which was likely intended only for international public consumption. In the words of Amit Shah, it is simply a “jumla”.
In a vulgar display of favoritism, the government is now preparing to compensate foreign vaccine maker Pfizer, a benefit that has not been given to any vaccine maker to date. While the compensation is available to all manufacturers, it will also cover Bharat Biotech, whose vaccine is being administered under an emergency use authorization, as phase III trials have not been completed.

The haunting question should be why are basic services failing to reach those most in need? Why has routine immunization not reached all children?

The government’s clumsy management of immunization policy becomes more and more confused with every decision. On the one hand, the Indian government is joining with other nations around the world to negotiate a global treaty on human rights and business, so that multinational corporations can be held legally responsible for human rights violations. man, if so, but on the other hand, we have to see if it will work the discourse on corporate responsibility? People have not forgotten several cases of corporate abuse in our country, including the heartbreaking Bhopal gas tragedy of 1984.
The government must move beyond the so-called market-based “solutions” (as they often add to the problem) if it is to have a positive impact on those most in need. Initiatives such as the use of drones to deliver vaccines need to be looked at very carefully because of the past history where corporate profits have taken precedence over people’s interests.
Furthermore, the haunting question should be why are basic services failing to reach the populations most in need? Why has routine immunization not reached all children? Why are most deaths due to diseases that were primarily preventable? Why do companies whose products make us sick and sick continue to make profits when our populations suffer from multiple pandemics of preventable diseases? Why is profiting from illness a norm and not a crime against humanity?
During a mock exercise on April 26, 2021 in the morning at Paras Hospital in Agra, owner Dr Arinjay Jain, facing a severe oxygen shortage, cut off his power for 5 minutes to 96 patients to check which patients were critical. 22 patients were identified who began to turn blue. The other 74 were ordered to take care of their own oxygen.
The hospital claimed that only seven patients died over the next two days, but an investigation reveals that 16 have died. Paradoxically, the hospital received a good blow. While Jain was naive enough to admit his dilemma and his so-called greater experience, who should be held responsible for patient deaths due to neglect inside public hospitals and while waiting for hospital beds in the ambulances outside?
We must remember that in 2017, when oxygen scarcity was not yet a pervasive phenomenon, Dr Kafeel Khan lost his job simply because the oxygen supply from BRD Medical College in Gorakhpur, where he was nodal officer of the encephalitis service, was interrupted due to non-payment of contributions, which he was not responsible for as proved by a ministerial investigation.

Seventy children had died by then. If punitive action is the answer, then the death scale requires even more heads this time around and more institutions and establishments or even entire governments should be sealed for abdication of responsibility! But probably by giving the hospital in Paras a good blow, the government does not want to open a Pandora’s box.
—
* With Socialist Party (India)