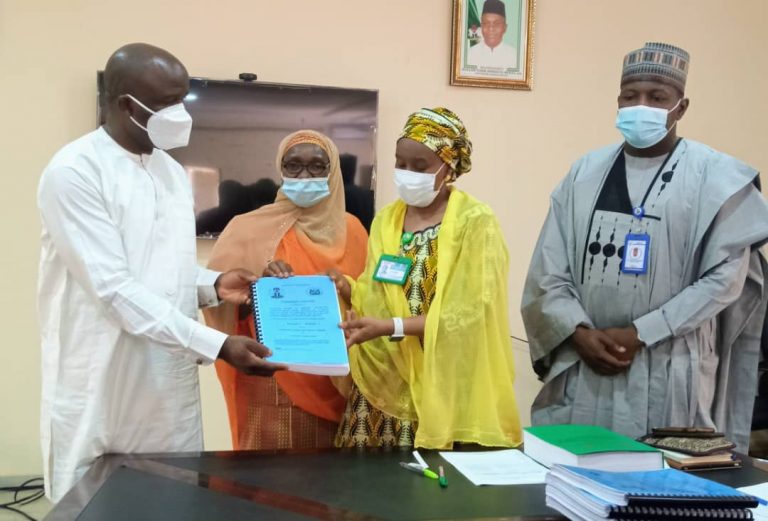 The Kaduna State Project Implementation Unit, Accelerating Nutritional Outcomes by
Nigeria (ANRiN) has signed a contract with the Society for Family Health (SFH) to provide integrated basic nutrition and adolescent health services in the state.

The coordinator of the ANRiN project, Dr Zainab Muhammad-Idris, who signed on behalf of the organization in Kaduna.
Friday, said the contract would complete the process that began about a year ago.

According to her, the contract, which will end by December 31, 2023, will mark the start of the delivery of a package of basic nutrition services (BPNS) and integrated adolescent health services (AHNS) at the community level. .

Coordinator of the ANRiN project, Dr Zainab Muhammad-Idris,
signature of the contract on behalf of the government of Kaduna State

Also, the Commissioner for Health, Dr Amina Mohammed-Baloni. explained that ANRIN is a project funded by the World Bank and implemented in 12 states of the country.

She added that Kaduna State was among the 12 states due to the high rate of stunting among children under five, which stood at 48.1% (Nigeria Demographic and Health Survey 2018).

She said this step was the result of the government’s commitment to improve the nutritional status of children under five in the state.

She added that the development goal of the project was to increase the use of quality and cost-effective nutrition services among pregnant and breastfeeding women, adolescents and children under five in the state.

The commissioner said that seven non-state actors have been shortlisted to provide BPNS and AHN services in the state, adding that SFH came second after a thorough selection process based on quality and cost.

She explained that the state had been split in two for the provision of services by two non-state actors.

â€œOne of the services to be provided is improving the knowledge of mothers and caregivers of children 0-23 months of age on improving behaviors related to maternal, infant and infant feeding practices. of the young child.

â€œSFH will also provide micronutrient powders to children aged six to 23 months to improve the quality of complementary feeding.

â€œHe will also provide iron and folic acid tablets to pregnant women during pregnancy through counseling during antenatal care sessions.

She said the NGO will also provide zinc / oral rehydration solution for the treatment of diarrhea in children aged six to
59 months.

â€œThis is a performance-based project, and we believe that SFH, with its vast experience, will provide the best interventions that will improve the nutritional status of our children and women in the long term.

“We therefore look forward to improving the nutritional indices that can be attributed to this intervention,” said the Commissioner.

SFH Managing Director Dr Omokhudu Idogho said winning the ANRiN contract was a very exciting time and a rare opportunity to do something the group has always dreamed of.

Idogho, who signed on behalf of SFH, said the organization has always wanted to support Kaduna state to achieve population-work impact.

He added that â€œSFH is a proudly Nigerian organization and was already considering interventions that will profoundly change the nutritional indices of the state. It is therefore a personal commitment that we bring to it.

â€œI want to assure you that we will go beyond the call of duty to deliver a program of which the state will be very proud and will make a difference in the lives of targeted beneficiaries. (NAA)

The “One Health” approach vital to the fight against pandemics

Global child and adolescent health targets under threat without urgent and…