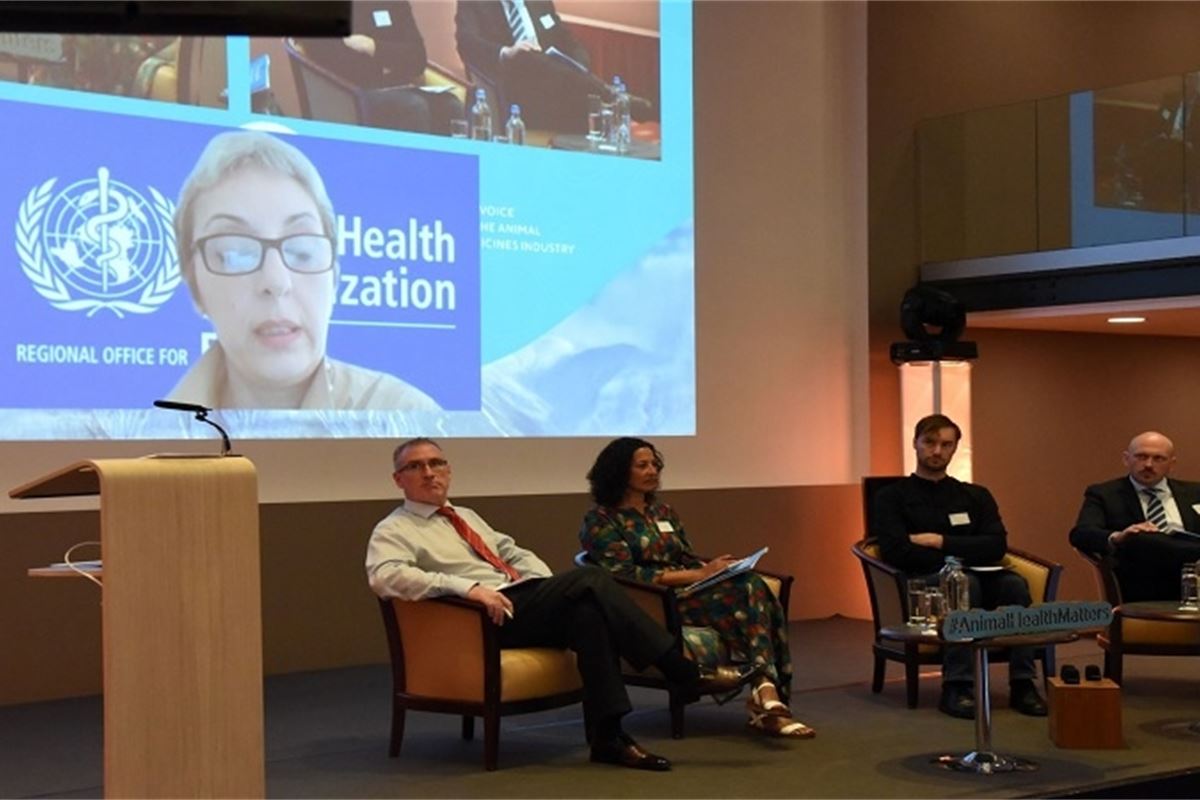 One Health is an approach that brings together multiple sectors to achieve better health outcomes. The COVID-19 virus and what is sometimes called the “silent” pandemic of antimicrobial resistance, has shed light on the interconnection between animal, human and environmental factors.

AnimalhealthEurope has been beating the drum for a ‘One Health‘ approach for many years. The links between human and animal health are very clear. It is estimated that more than 6 out of 10 known infectious diseases can be spread from animals, and 3 out of 4 new or emerging infectious diseases originate from animals. At this year’s annual meeting, the organization asked how this concept was applied.

One Health: “It’s not just adding more policy or additional expertise, it’s about thinking differently, really working together and thinking together.” Monique Eloit

“Five years ago, we had already organized a conference on One Health and the question was: Is “One Health” just the latest buzzword? We discussed what it meant and what it involved,” said Roxane Feller, Secretary General of AnimalhealthEurope. “Two years ago, the pandemic hit. I think we have all realized how interconnected we are in the world, between humans, between humans and animals, and between humans and the environment.

The Director General of the World Organization for Animal Health (WOAH, founded as OIE), Monique Eloit, made a strong case for a One Health approach. WOAH works with the World Health Organization (WHO), the Food and Agriculture Organization of the United Nations (FAO) and – since March this year – with the United Nations Environment Program ( UNEP) to develop a joint One Health action plan. OMSA will also shape the global agreement on pandemic prevention. Eloit says One Health isn’t just about working together: “It’s not just about adding policy or additional expertise, it’s about thinking differently, and really about working together and thinking together .”

Eloit stressed that there is not just one approach and that the answer depends on the disease, available treatments, vaccination possibilities, economic considerations and many other factors. The approach must also be flexible and adaptable to different ecosystems, including very divergent local contexts. With rabies, for example, Eloit said we have the tools, but we also need to provide more financial support and political commitment.

Deputy Director General, DG Health and Food Safety, European Commission, Claire Bury, said the Commission’s approach to antimicrobial resistance was a good example of a strong One Health approach. To give an idea of ​​the breadth of the considerations, Bury said the Commission went well beyond a narrow approach and addressed animal welfare, biodiversity, soil health, sustainable use pesticides and climate impact, among other issues.

Bury explained how the Commission partnered with the European Environment Agency to create a European Climate and Health Observatory to visualize the impact of climate change and related health risks and was also monitoring quadripartite work on the One Health Joint Action Plan, Eloit had described. .

On 3 March 2022, the European Council adopted a decision authorizing the opening of negotiations for an international agreement on pandemic prevention, preparedness and response. The Council explicitly calls for a “One Health” approach.

“There is no longer human health, nor animal health, but a true ‘One Health’ perspective.” Ludovic Sepé

A second panel discussed “The balance between public, animal and environmental health. How do you translate this into politics? Director of WHO Country Health Programs for Europe, Nino Berdzuli, spoke about the quadripartite work which will, among other things, operationalize a partner platform this year, support several country projects, d improve oversight and establish a technical advisory working group to provide overall strategic guidance and help operationalize the One Health approach.

The joint European program One Health, supported by the European Commission, is already testing the approach. Ludovico Sepe explained how the project brings together different experts: “We have experts in three areas, we sit together, we manage the projects together, we make decisions together. We have reached a point where there is a great understanding of each other’s point of view, there is no longer human health, animal health, but a true “One Health” perspective. He said more work needed to be done in other disciplines and that a problem within the academic community was the failure to fully recognize interdisciplinary work.

Aida Bakri, Sustainability Manager, explained how the environmental element of One Health is the least integrated into current thinking and tends to be understudied and undervalued. A point of view that was taken up by Sepe.

Bakri and Andrea Bertaglio, a journalist specializing in sustainable development, both stressed the importance of communication and the responsibility of journalists to provide accurate and well-informed reporting. Good communications are seen as an important means of combating misinformation, and even disinformation.

Steve Hallahan from the European Platform for Responsible Use of Medicines in Animals (EPRUMA) explained how good animal husbandry and nutrition can improve health outcomes. He expanded the discussion to add that pets can improve human mental health and have therapeutic value.

“Each euro invested actually generates €5 in benefits for public health. We don’t need to lose €3 trillion to a pandemic. » Dieter Schillinger

The challenges facing developing countries were highlighted by Dieter Schillinger, Deputy Director General of the International Livestock Research Institute, he offered a more global perspective based on his work experience. His presentation revealed how the reflection on the African continent due to the challenges faced means that in some respects the reflection is closer to a One Health approach.

Schillinger took Rift Valley fever as an example. The mosquitoes implicated in this disease have been found in Europe, but there is already a risk assessment that aims to prevent infected animals from coming to Europe. A vaccine is being developed for animals and this can be adapted for human use. He also highlighted the benefits of investing early: “Every euro invested actually generates €5 in public health benefits. We don’t need to lose €3 trillion to a pandemic. »

The morning discussions were concluded by AnimalhealthEurope’s new President, Rob Kelly. He said: “Animal health matters because healthy animals can help secure our collective future. With healthier and better managed animals, we can aim to reduce livestock emissions by 30%. With healthy animals, we can aim to reduce the loss of food production due to animal disease alone by 20%, and with animal health and an increased focus on prevention, we can continue to reduce the need for antibiotics. »

This content was commissioned by AnimalhealthEurope and produced by Dods