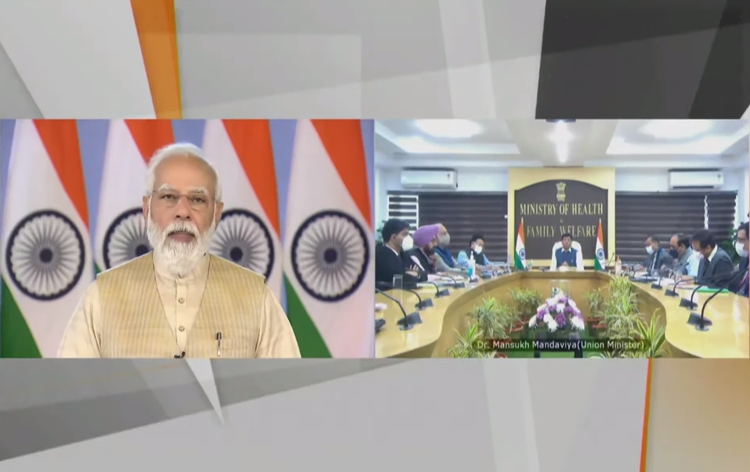 Government has created health infrastructure in the spirit of One India One Health: PM Modi

Prime Minister Narendra Modi said the government is striving to build a health infrastructure in the country that goes beyond major cities with a One India One Health spirit.

He pointed out that essential sanitation facilities will be brought to villages at block and district level.

The Prime Minister said the government has taken a holistic approach to the health system and the focus is on health and wellbeing equally to make the country’s health care more inclusive and robust.
Addressing the webinar on the post-union budget of the Ministry of Health, Mr. Modi said that this budget expands the health system reform and transformation efforts over the past seven years.

The Prime Minister said the effort is the expansion of infrastructure and human resources related to modern medical science, the promotion of research in the Indian traditional medicine system like AYUSH and its active engagement in the health system and to provide better and affordable healthcare facilities to every person, every part of the country through modern and futuristic technology.

Mr. Modi said that this infrastructure needs to be maintained and upgraded from time to time. He said that for this, the private sector and other sectors will also have to show more energy.

The prime minister said that to strengthen the primary healthcare network, the construction of 1.5 lakh health and wellness centers is underway. He said that so far more than 85,000 centers provide facilities for routine check-ups, vaccinations and testing.

Mr Modi said that in this budget, the mental health care facility has also been added to it.

He said that the 2022-23 Union budget in the health sector focuses on three major pillars, the expansion of modern medical science infrastructure and human resources, the integration of research in modern and futuristic medicine and technology for better and affordable health care.

The Prime Minister said the health budget saw the upgrade of two lakh Anaganwadis to Saksham Aanganwadi. Mr. Modi urged the private sector to play a proactive role and respond to the operational requirements of the sector.

He said the country’s health sector should focus on becoming Aatma Nirbhar in building Indian-made healthcare targets, medicines and medical equipment. He said a quality and affordable healthcare system will evolve with the PLI program for the healthcare industry that can meet national and global demands in medicine. The Prime Minister said platforms like Cowin have shown India’s prowess in digital technology to the world. He said Ayushman Bharat Digital Mission has created a simple interface to connect consumers and healthcare providers.

Mr Modi said facilities such as telemedicine, remote health care and teleconsultation will cater to mass audiences in times of emergency.

He said India has an opportunity to show its capabilities to the world and AYUSH will play a key role in improving the health sector and meeting global demands for healthcare.

The Prime Minister hailed Indian medical professionals, who have been hailed around the world for their prowess in this sector.

Mr. Modi also praised the medical professionals involved in the sector for successfully carrying out the largest vaccination campaign in India.