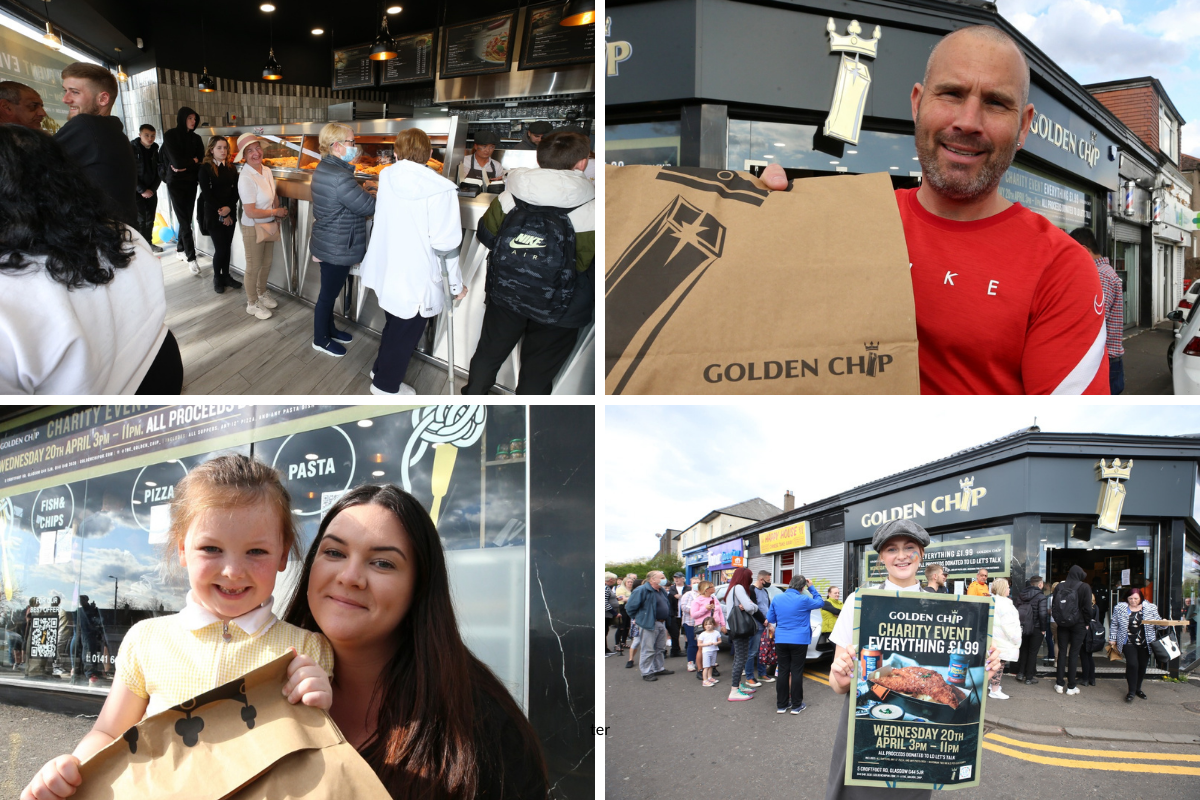 Hungry Glasgow HUNDREDS lined up at a Southside chip shop to support a mental health campaign as part of a special promotion yesterday.

Golden Chip, located in Croftfoot, was offering everything on its menu for £1.99, with all proceeds going to LD Let’s Talk.

LD Let’s Talk promotes mental health awareness by hosting weekly get-togethers in Castlemilk that are open to everyone.

They also sponsor benches in schools and parks, which invite people to sit down and talk about how they feel.

Rebecca Grainger in front of the Golden Chip

The queues were long all afternoon

Residents online were thrilled to get a lot and support a worthwhile cause.

From 3 p.m. until late, hundreds of customers came to enjoy the food.

The queue flowed down the street and the store was full all afternoon.

Derek Reid, Founder of LD Let’s Talk, said: “Ever since I finished work my phone went wild saying the line was around the corner.

“It’s a great cause and I appreciate the Golden Chip for doing it.

“It’s a very successful night for the campaign and I hope for them too it’s a huge thing they do.”

The total amount of the procedure will go to the construction of new benches.

The restaurant staff have hidden three special tokens in three bags of food and the lucky winners will be able to decide which schools in Glasgow will receive them.

Rebecca Grainger behind the counter

Everything in the restaurant was £1.99 for a day

Jetta Hutchison, from the Golden Chip, said: “Yesterday was very busy, the queue was just up the street. Lots of customers came in, but the amazing thing is that it’s for a good cause.

“Not many people talk about mental health, I think it’s important to let people know that it’s okay to not feel well.

“The staff did well, obviously it’s for a good cause, so everyone is really happy. We just aim to get everyone served and give them good food.”

Rebecca Grainger, a waitress at the chip shop, added: “It was absolutely crazy. Honestly I didn’t expect so many people, I didn’t even know there were so many people who knew us.

“It’s amazing to see everyone and we’ve worked really well together.

“I’m really excited for everyone to try the food and see the effort Ali put into it.

“A lot of customers have said we’re doing really well and they’re impressed that we’re doing all of this for LD Let’s Talk.

“Customers know our food is good, so for them to get it at this price, I think they’re very happy.”

Greg Johnson with his order

Greg Johnson, who works with LD Let’s Talk founder Derek Reid, said: “It’s a great cause for the community.

“It’s about tapping into the people who really need that support and that help.

“I have a sausage supper, a fish supper, five pickles for the wife and a curry sauce.”

John Lawless and his granddaughter Erinn

John Lawless, 65, who took his granddaughter, said: ‘I’ve been here several times, the food is great and mental health awareness is becoming more and more important.

Amy Gilchrist and her daughter Ava Amy Gilchrist, 25, who lives there, said: “I come here quite often, they have really good food.

“My favorite is a fish supper, which is what I had today.

“I am very happy to support this campaign, mental health is very important.”

Amanda Gilchrist, 45, said: “The food is great, I normally order once a week.

“It’s also a great opportunity to raise funds for the campaign.”

The influence of a school social network intervention on adolescent health behaviors: an agent-based and gender-specific model