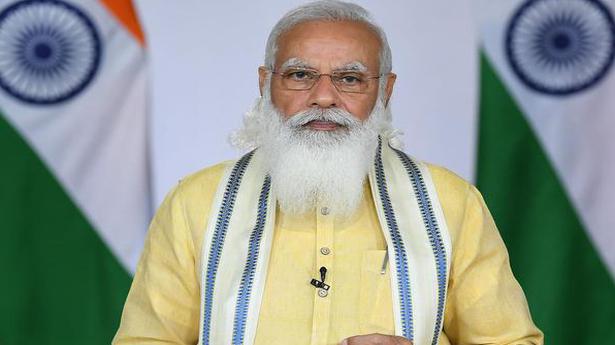 G7 Summit | Modi calls for ‘one land, one health’ approach to deal with coronavirus

As chair of the G7, the UK invited India, Australia, South Korea and South Africa to the summit as guest countries.

Addressing the first sensitization session of the ongoing G7 summit, Prime Minister Narendra Modi on Saturday expressed India’s commitment to a â€œcollectiveâ€ solution to global health challenges. Prime Minister Modi called for a â€œone land, one healthâ€ approach that seeks unity and solidarity among states around the world to deal with the pandemic. He also stressed the need to keep raw materials for vaccines easily accessible.

Sources said that Modi “has asked for G7 support for India and South Africa’s WTO proposal for a TRIPS waiver.” The waiver will help India increase production of COVID-19 vaccines. The argument found strong support from Australia and other countries. French President Emmanuel Macron has also pleaded for capacity building in countries like India which can play a vital role in containing the pandemic.

Mr. Modi spoke of the particular responsibility of â€œdemocratic and transparent societies to prevent future pandemicsâ€. He expressed “India’s emphasis on maintaining open supply chains for raw materials and vaccine components to help improve vaccine production in countries like India.”

Prime Minister Modi participated in the session via virtual mode as his visit to the UK was canceled on May 11 due to the current second wave of COVID-19 which has hit India hard. British Prime Minister Boris Johnson has invited Prime Minister Modi to attend the awareness session of the G7 meeting in Cornwall, which is also attended by the leaders of Australia, South Korea and South Africa .

Mr Modi said India was ready to share its experience and expertise regarding the pandemic with the rest of the world.