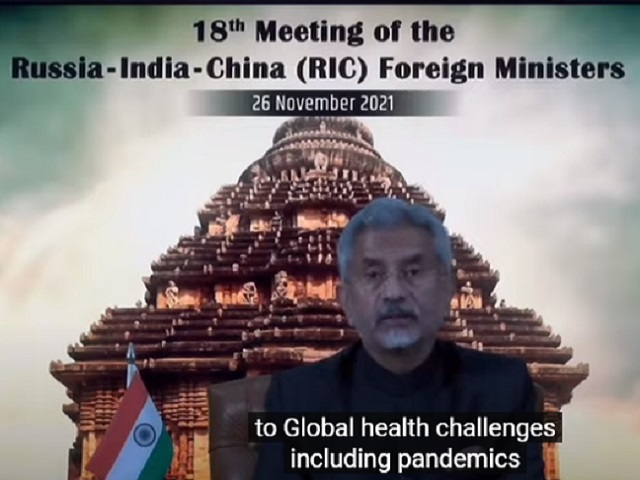 Addressing the virtual meeting, EAM Jaishankar urged the ICN countries to coordinate their approaches on terrorism, radicalization and work together to ensure that humanitarian aid reaches Afghanistan without hindrance or politicization.

â€¢ EAM Jaishankar, addressing the meeting, said our approach to global development should be people-centered.

â€¢ He said the need of the hour is â€œOne Earth, One Health,â€ adding that COVID has shown the interdependence of the interconnected world.

Our approach to global development must be people-centered. COVID has shown the interdependence of the interconnected world. The need of the hour is “One Earth, One Health”: EAM Dr S Jaishankar at the 18th Russia-India-China Foreign Ministers’ Meeting

â€¢ The Union Minister stressed that as a longtime neighbor and partner of Afghanistan, India is concerned about recent developments in this country, in particular the suffering of the Afghan people.

â€¢ He reiterated that India supports an inclusive and representative government in Afghanistan as well as other UN resolutions 2593.

â€¢ He further stressed that the RIC countries must work together to ensure that humanitarian aid reaches the Afghan people without hindrance or politicization.

The RIC countries must work together to ensure that humanitarian aid reaches the Afghan people without hindrance or politicization. It is necessary that the RIC countries coordinate their respective approaches on the threats of terrorism, drug trafficking & radicalization: EAM

â€¢ The EAM underlined the importance for the RIC countries to coordinate their respective approaches on the threats of terrorism, radicalization and drug trafficking.

â€¢ EAM further pointed out that India has offered 50 metric tons of wheat as humanitarian aid to Afghanistan to deal with the drought situation in the country.

â€¢ He explained that Pakistan authorized the sending of humanitarian aid from India to Afghanistan via the Wagah border.

India has not recognized the Taliban government in Afghanistan and has started talks on restoring peace to the country and providing all necessary assistance to its citizens.

Leave No One’s Health Neglect: Invest in Health Systems for All – PAHO/WHO