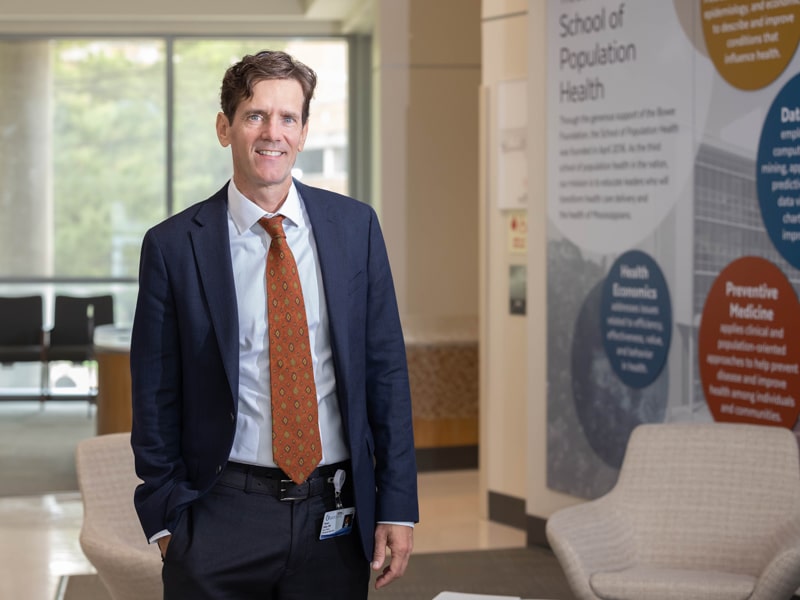 Although Dr. Thomas Dobbs spent most of his career as a public health official, a career in medicine was not his first choice. As an applied physics major at Emory University, he intended to become a theoretical physicist.

A summer spent at the university hospital, where he learned that working in health care is a marriage of science, service, and the humanities, changed the Alabama native’s mind.

“It seemed like the right thing,” he said. “I was very smart, but I was never going to win a Nobel Prize.”

Three decades later, the new dean of the John D. Bower School of Population Health at the University of Mississippi Medical Center appears to have made the smart decision about his career trajectory.

As dean, he leads a school made up of three departments: data science, which focuses on extracting knowledge and insights from data; population health sciences, which trains graduates to use policies, programs, and other interventions to improve health outcomes and reduce disparities; and Preventive Medicine, which, shared with the School of Medicine, trains health professionals to prevent disease and promote the health of individuals and populations.

“If you think about health care, we take care of individuals, which is very important to do,” the dean explained. “But when you think of population health, we think of the health of the whole population and the conditions that promote the health or lack of health of a community.”

Only about 20% of a person’s well-being is related to access to clinical health care, Dobbs said. The other 80% comes from environmental factors: the community you live in, access to education and healthy food, and healthy behaviors.

“So it’s all these other things that in the United States we ignored more than we paid attention to,” he said. “And that’s what population health does.” We’re trying to say, ‘Hey, we’re never going to be healthy if we keep throwing money at health care.’

“When we look at other developed countries around the world that are much healthier than us, is that because they’ve invested a lot more money in health care? Of course not. It’s because they have policies, approaches and support systems that make it more likely that people will be healthy, unlike here where it’s extremely difficult to even walk. Our activity will therefore be weak. It’s super easy to get access to unhealthy foods because they’re cheap, they taste good, and they’re easy. So in the United States, it’s hard to be healthy.

Prior to assuming this role, Dobbs served the Mississippi State Department of Health as State Epidemiologist and Regional, Deputy, and State Health Officer, the latter of whom led the state’s response to the COVID pandemic and addressed the health inequities plaguing the state. He has also held national and international leadership positions in the fight against diseases such as HIV and tuberculosis.

Still, his college administrative experience was “light” prior to this appointment, he said.

What he doesn’t miss, Dobbs said, is engaging communities, understanding what’s happening outside the walls of academia, having connections, and having seen the real impact of determinants. social impact on individuals and communities.

“And having had other leadership roles that involve varying degrees of stress and challenge, having weathered some of them and learned from them, I hope I can bring something to the school.”

“In his role as state health officer for the Mississippi State Department of Health, Dr. Dobbs had responsibility for a large organization that worked to meet the health care needs of the approximately 3 million of people residing in Mississippi,” Rodgers said. “He has traveled throughout the state, meeting people where they live, interacting and learning from community leaders, and extending a helping hand wherever and whenever possible. Dr. Dobbs is not afraid of hard work and he possesses a high level of compassion and courage that has allowed him to succeed in his role for the state.

“In his new role as Dean of the School of Population Health, we look to him to bring to the work the determination and vision that we already know from him, so that he develops academic and outreach programs that help meet the needs of our fellow citizens. He has just the right mix of experience, wisdom, skill and transformative spirit to succeed at a high level, and we can’t wait to see what the future holds for his school. We are in exceptional hands.

A month and a half after taking office, Dobbs has set himself some short-term goals. One is to increase enrollment, which stands at 58 students. He also wants to provide what he calls a “population-based mentality” and educational program to other UMMC schools.

“Long term, we have the opportunity to be a world-class public health research institution,” Dobbs said. “It’s partly because we live in the nexus of all the bad things that cause poor health. Not only will we have things that can make a difference, but there will be opportunities with external partners doing research to bring grants in. We now have great researchers, but to grow the whole program into a world-class research operation, educating future health leaders about population health and all of its various intricacies.

Dobbs said he wants the school to be a “force to drive, induce and catalyze change” in the state, especially in areas that make communities unhealthy that other medical professionals don’t. don’t have time to concentrate.

“Mississippi has a separate education system,” he said. “And nobody really cares. But that’s what population health is all about. It’s that kind of thing, taking a mirror to ourselves and kind of helping bring those people together that can make things different.

His average day so far is changing, Dobbs said. On paper, he spends 70% of each week doing administrative work and teaching, 20% on infectious diseases and clinical work through an appointment at the Department of Medicine’s Division of Infectious Diseases, and 10 % allocated to the health department that manages the Carrefour. Sexual Health Clinic.

In doing so, he works closely with the Jackson Heart Study, the Myrlie Evers-Williams Institute for Eliminating Health Disparities, specialty care for adults, and people living with HIV.

“It’s a nice balance. The pleasure of variety. Things overlap,” he said of his responsibilities. “It also allows me to be a part of public health, and having this health department appointment helps maintain that relationship, because population health and public health go hand in hand.”

He is also excited to work with Dr. Saurabh Chandra, Director of Telehealth, to advance telehealth opportunities for people at risk of or living with HIV.

The feeling is mutual, said Chandra, who shared these statistics from the Centers for Disease Control and Prevention: About 12,000 people are living with HIV in Mississippi and 4,500 at high risk of developing HIV, less than 25% of whom are prescribed pre-exposure prophylaxis drugs.

The telehealth center worked with the Department of Infectious Diseases to develop an app that will provide education and access to care for patients at high risk of HIV, Chandra said. Called UMMC HIV Cares, it will be available via app stores in the coming weeks.

“We are very pleased to partner with Dr. Dobbs and leverage his knowledge and expertise to make this app available to high-risk patients across the state, as well as provide access to healthcare through telemedicine to patients already diagnosed with HIV.”

Dobbs invites others interested in pursuing a population health program to reach out on forming partnerships.

Outside of work, being a doctor seems to be a family affair. He enjoys spending time these days with his wife, Dr. Kimberly Dobbs, a pulmonary and critical care physician at UMMC. Having worked in different cities for eight of the past 10 years, it’s nice to live and work together, he said. She joined the staff in July, a month before her appointment.

Dobbs himself is not the family’s first doctor; his grandfather and great-grandfather were doctors.

The legacy brings him back to why he went into medicine.

“I think we all want to make a difference in one way or another. And I hope we will make differences in a good way.

See a typo? Report it here.